I am Shaun, a driven consultant excited about all things Microsoft. I have spend a number of years helping customers migrate their environments to Microsoft 365 as well as Microsoft Azure. The technology I focused on the most was Microsoft Exchange and over the years I started moving more towards Microsoft's cloud technologies. In my blog you will find topics around Azure, Exchange, Teams, Intune and a few PowerShell here and there :) . I am a major Lego Fan boy and every now and then I do show some of the builds on my socials. 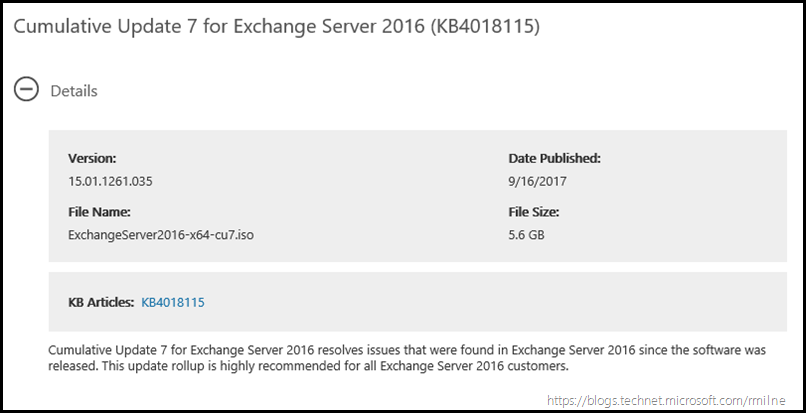 Microsoft made the latest CU (cumulative Updates) available for both Exchange 2013 and Exchange 2016. These updates include fixes which was reported by customers as well as includes security updates.

During a previous post from Microsoft, they have informed customers that a minimum Active Directory forest functional level would be forced to 2008R2 (Active Directory Forest Functional Levels for Exchange Server 2016), This update enforces the announcement from Microsoft. The change will require all Domain controllers in the forest to have a functional level of 2008R2 or higher.

.Net Framework is another announcement which was made and this is what the Exchange Team has said about .NET Framework 4.7.1.

The Exchange team has decided to skip supporting .NET 4.7.0 with Exchange Server.  We have done this not because of problems with the 4.7.0 version of the Framework, rather as an optimization to encourage adoption of the latest version.”

Known Issues Which Is unresolved:

The following is known issues which is still unresolved and will be resolved in future updates.

KB articles that describe the fixes in each release are available as follows: